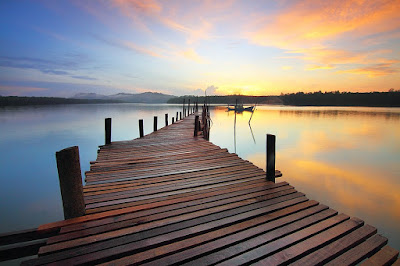 “It is always important to know when something has reached its end. Closing circles, shutting doors, finishing chapters, it doesn't matter what we call it; what matters is to leave in the past those moments in life that are over.”
Paulo Coelho

I will start by telling you a bit about yesterday.  It was my usual midweek day off.  I got up a bit later than the norm, relishing the fact that's a school holiday and I don't have the early morning drive to get Louis to the bus at Totnes.  I pottered around the house, tidying as I went, put the washing on and made and received a few phone calls.  Around lunchtime I went to pick crab apples in the park as I plan to infuse them in whiskey.  There I got talking to a lovely woman who'd just moved here and accepted her invitation of a cup of tea.  We watched a pod of dolphins from her balcony, discovered that we had similar interests and swapped details.  The start of a new friendship perhaps?   More pottering, a cup of tea with Mr Metrosexual, a swim in a sea that was choppier than usual with the seal looking on.  Then another few phone calls and some chilling time in a beautifully quiet home.

All day I thought about writing a post  but, try as hard as I might I couldn't come up with a topic.  The wasted effort niggled.   And so a fledgling idea grew and grew until it reached a crescendo in the afternoon as I walked up the steps from the cove, soggy from my dip.  I'd already decided that I'd stop my blog  at the three thousandth post.  It feels right to end it earlier than that, thirty short of my intended target.

I started blogging over eight years ago to instill the discipline of writing regularly.   It's certainly helped me achieve that.   I've written about all sorts and the content and my  style has evolved over time.   The quality of what I've come up with has been variable in line with my beloved Mr Cohen's advice to forget perfect offerings.  I've shared random silliness alongside pretty personal stuff.  The latter was done with the belief that being transparent about pain and challenges isn't a demonstration of weakness but can teach and touch others.

I've changed over the years too.   I don't think my 2010 self, or maybe even my 2016 one, would recognise the person that I've become.   'When were you at your happiest?' Red Mel asked me in the van this weekend, mimicking a question in a Guardian interview she was reading.  I did not hesitate with my reply.  'Now!' I said.  It's interesting that many of life's outward challenges remain in place and it's my inner perspective that has changed.  I wonder whether the writing has been instrument in this shift.

At this time when I feel more creative, positive and fulfilled than ever I see the lack of inspiration as a sign.   Other things are blowing into my life.  I want to make time for the new including exploring different ways of writing to express my creativity.   And so with a little sadness I am bringing the Lovelygrey chapter of my life to a close.  Thank you all so much for your kindness and support.    There will be a final post about my new 'literary' venture when it has been conceived.

PS:  Perhaps  'Nutscaping for Girls' was my finest blogging moment. It was the post that I most enjoyed writing!

Email ThisBlogThis!Share to TwitterShare to FacebookShare to Pinterest
Labels: Writing

A Unscheduled Interruption In Service 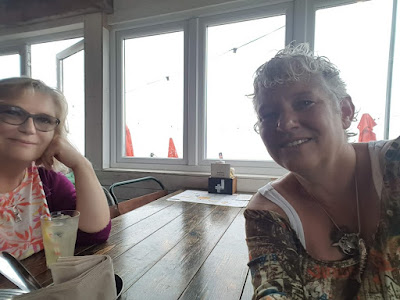 Oops a little unplanned absence courtesy of the patchy phone and internet service down in Cornwall.  Thanks for those who've expressed concern including my mum who'd forgotten I was going away and relies on a daily post to let her know I'm still alive and kicking.   I decided to enjoy a break rather than fret about the logistics of daily blogging on a campsite where I would have needed a small mortgage to pay for Wifi.  Here's me and Red Mel in the cafe on Pentewan Beach demonstrating wet and dry contrasting looks.  In spite of mucky weather I'd just been frolicking in the waves whilst my friend stayed safely on land.  Wimp or wise woman?  We have our different opinions!

So now I'm back at home very relaxed indeed.  Normal service may resume tomorrow.... if I have slightly upped the ante from a very chilled mindset.
Posted by lovelygrey at 20:17 7 comments:

Email ThisBlogThis!Share to TwitterShare to FacebookShare to Pinterest
Labels: Days Out in Cornwall 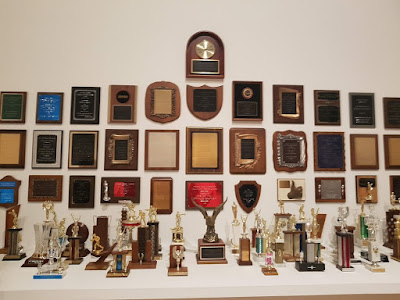 'You do realise that this is the fourth art gallery on this holiday?' asked Louis disgruntledly as we entered the Whitney Museum of Modern Art.  He'd counted Woodstock and the Storm King Arts Center which I'd sneakily tried to disguise as walks outside.  No chance then of seeing MoMA or the Metropolitan on this visit.  My boy was all art-ed out.  Because of the generous admission price he got in free and so he used this as an excuse to disengage, sit on a bench and text girls on his phone.

So I wandered around alone and discover what I think is my favourite New York attraction.  Such challenging exhibits in a beautiful gallery space.  Things to think about at every turn.

I called Louis over to look at just one piece,  Carl Pope's 'Some of the Greatest Hits of the New York City Police Department: A Celebration of Meritous Achievement in Community Service 1994'.  It's ugly visually and in the message it conveys.  I read the notes on it and it brought me to a halt.  Never had I been moved by art like this before.  Another woman standing next to me turned and said 'It's horrific isn't it.'

Each trophy, bought from suppliers who made them specifically for law enforcement use catalogues acts of brutality by NYPD in the years between 1949 and 1994.  They have the names of the police officers concerned and those who were killed or brutalised.  It was originally part of an exhibition  in 1994 exploring how the masculinity of black men had been represented in art.

I hope times  have changed and this powerful work represents a historic situation.  Certainly the police cars in the city these days are emblazoned with the motto Courtesy:  Professionalism:  Respect.  Maybe this piece was instrumental in effecting change.
Posted by lovelygrey at 06:59 5 comments:

Email ThisBlogThis!Share to TwitterShare to FacebookShare to Pinterest
Labels: Art, US of A

The Second Martha Stewart treated me and Louis to a Broadway show last  week. She asked me to choose and I settled upon Kinky Boots.  It was fantastic and in such an interesting old theatre too.  Louis was not impressed when I told him that we were going to see a musical about a shoe factory making boots for drag queens.

However on the way to the airport Martha asked him what the Top 5 highlights of his holiday were.  He didn't hesitate with his number one.   'I didn't think I'd like it but Kinky Boots was surprisingly good!'  I knew he'd liked it.  He was either laughing or sitting with an enraptured expression.

Here's a number from the show.  It's not all the same cast members that we saw but it will give you the gist.
Posted by lovelygrey at 08:24 2 comments:

Email ThisBlogThis!Share to TwitterShare to FacebookShare to Pinterest
Labels: Music, US of A

Not Just Any Yellow Flash..... 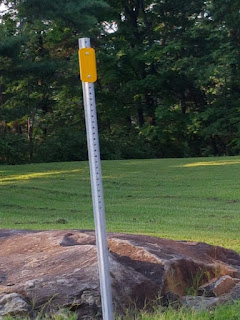 ...but a trail marker from the Appalachian Trail at Bear Mountain last week.   This was where the first section of the trail was opened in 1923.   I spotted the familiar yellow flash from the car on the way to the airport.   I think that I must have crossed it on foot earlier during the holiday. Regular readers might remember that I walked a substantial part of this famous long distance footpath in 1997.  I hanker to return and complete the whole thing.  Just the small matter of child rearing got in the way and stopped me.

I had a wonderful chat with a young doctor yesterday whose hobby was long distance trekking.  He's pointed me in the direction of some of the trails in Spain and Portugal.  I told him that what I loved about the pursuit was that your mind empties.  Thinking slows down but in a good way.  He knew exactly what I meant.
Posted by lovelygrey at 12:26 No comments:

Email ThisBlogThis!Share to TwitterShare to FacebookShare to Pinterest
Labels: US of A, Walking


Do you remember this advert?  Back in my childhood dark ages the Humphreys caught the imagination of schoolchildren in our area.   It was like the 1970s equivalent of something going viral on social media today.    Stickers from the local Unigate dairy depicting pretty innocuous straws became  'must have' items.  The staff  must of  been so pissed off with the troups of kids marching in demanding them and getting in the way of the milk floats!
Posted by lovelygrey at 06:28 3 comments:

Email ThisBlogThis!Share to TwitterShare to FacebookShare to Pinterest
Labels: Reminiscing

With Thanks...To God and Bernie! 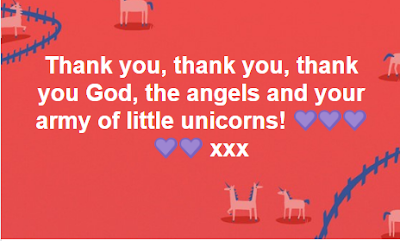 I had an encounter yesterday that stirred an enormous explosion of gratitude and relief in me.  Let me tell the story by going back to an unfortunate accident that happened a few months ago.  On the day that I got the letter telling me that I had finished paying the interest free installments on my bathroom I dropped a perfume bottle and cracked the washbasin. Arse!

Being a resourceful little bunny I bought a porcelain repair kit but that didn't stand the test of time.  An enormous hole opened up.  I sought advice from Mr Metrosexual, odd really as he literally calls out a bloke to put up pictures.  'You need Bernie.' he said.

This being Devon there was a bit of a delay but I arrived home from holiday to find a new washbasin installed.  And then unexpectedly Bernie popped around yesterday to finished the grouting.  He's a lovely Liverpudlian who told me that he took on the role of an odd job man because he likes helping  people for a reasonable price.

My house is old.  From out of nowhere I seem to have accumulated a list of repairs recently as long as the arm of a great ape.  This includes a mystery slowgrowing damp patch on the landing adjoining the bathroom.  Mr Metrosexual and I hadn't been able to work out the source of that but then we're not really the best qualified.  There's also a crack in the masonry by the front door, that in spite of many unsuccessful repairs, keeps opening up again.  They were my first priority and I haven't got the skills to sort it all out myself.  Why oh why didn't they teach these things in a seventies girl's grammar school?

Bernie looked at the crack and made that sucking noise that tradespeople are good at.  'It's easy to fix but going to take a day.   I'm going to have to charge you fifty quid.'  I nearly hugged him on the spot.   And then I went through all the little niggles that I have with my home at the moment.  He can fix each of them and will quote for some more pleasing home improvement work.  As I found when I resorted to carpet fitting myself  a decent tradesperson around here is as rare as rocking horse droppings.  I'm  so grateful that  I seemed to have found one!
Posted by lovelygrey at 07:05 7 comments:

Please Visit My Other Much More Sensible Blog

Promote your Page too